CWGC Tyne Cot Cemetery is an impressive yet understated haven of tranquillity that extends through the former battle landscape. With its 11,956 graves, it is one of the largest Commonwealth cemeteries in the world and it is a silent witness to the bloody Battle of Passchendaele. During the British offensive of 1917, almost 600,000 victims fell in 100 days for a territorial gain of only eight kilometres.

‘Tyne Cot’ was originally a German defence position on the first line in Flanders. In October 1917, the Australian troops established an aid station there that soon grew into a small cemetery with 340 graves for the soldiers who had succumbed to their injuries on the spot. After the war – between 1919 and 1921 – the British ‘Exhumation Companies’ collected 12,000 dead from the surrounding battlefields. Of these, only 3,800 bodies could be identified. The wall behind the cemetery contains the names of 35,000 soldiers with no known grave. They include British, Irish and New Zealanders who perished in the region after 16 August 1917.

Many tens and even hundreds of thousands of visitors come each year to pay their respects to the men – some still only boys – who lost their lives in the surrounding battlefields. A visit leaves no one unmoved. The cemetery was designed by Sir Herbert Baker and inaugurated in 1927. Nowadays, the Commonwealth War Graves Commission is responsible for maintaining the cemetery.

The visitors’ centre, which the British Queen Elizabeth II and the former Belgian Queen Paola inaugurated in 2007, provides more information about the cemetery itself and offers a panoramic view over the battlefields of 1917. A 3 km walking route, with thematic information panels, takes you from the Memorial Museum Passchendaele 1917 to CWGC Tyne Cot  Cemetery. The visitors’ centre is managed by the Memorial Museum Passchendaele 1917. 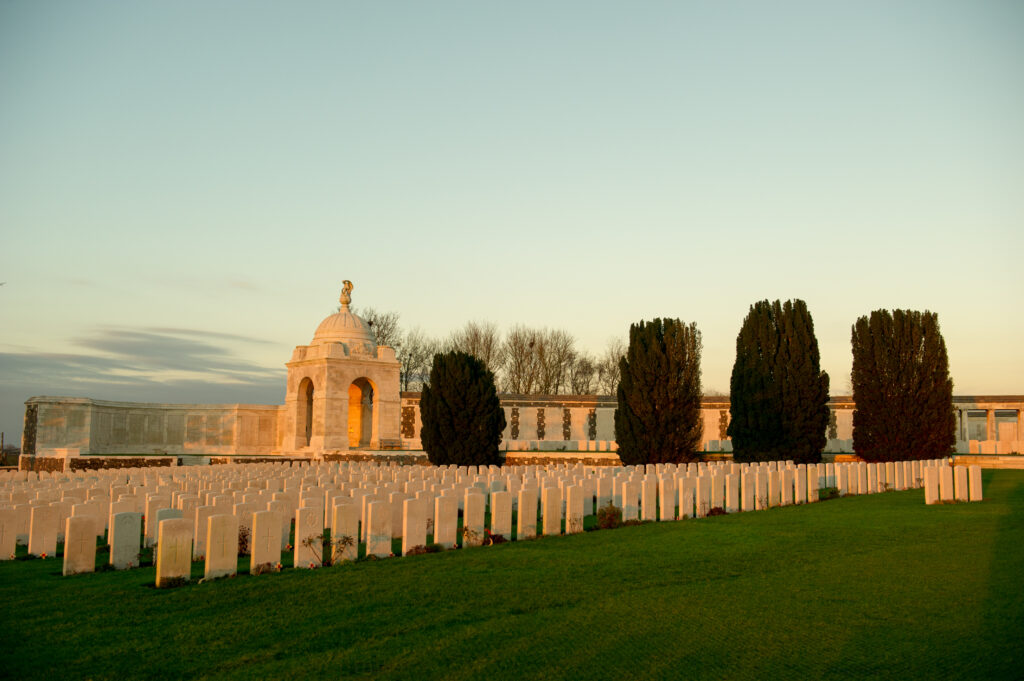